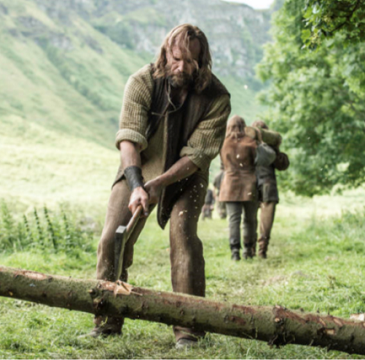 I was stupidly excited that the 35” American Felling Axe (4342) we supplied to Fire & Ice productions had a starring role in Game of Thrones in the hands of someone built to use it - Sandor Clegane AKA ‘The Hound’. Despite being left for dead he was alive & kicking (Season 6 episodes 7 & 8) wielding the axe like it’s very much smaller than it really is.

As well as using his felling axe to fell trees he splits wood; for mere mortals I would suggest a Splitting axe is a better tool for the job, but then again the prop wood did look like it would virtually split itself, unlike the more meaty (but longer burning) Oak we’re used to.

Unfortunately being Game of Thrones this woodcraft idyll didn't last long before the Brotherhood without banners came & massacred the villagers. The axe then turns from tool to weapon, used by the hound to despatch the baddies in the suitably gory manor I have come to expect from the show.

Disclamer: All our axes should only ever be used on wood and under no circumstance should you run amok with one.

What a shame in season 7 when the hound seems to have abandoned his axe with it’s 20 year guarantee he’s a fool not to hang on to it! Though I’m not sure how much use it would be against a White Walker - they’re superb craftsmen but I don’t think they use Valerian steel at Gransfors!